Excerpt from the bestselling book The End of Alzheimer’s: The First Program to Prevent and Reverse Cognitive Decline Author: Dale E. Bredesen, MD 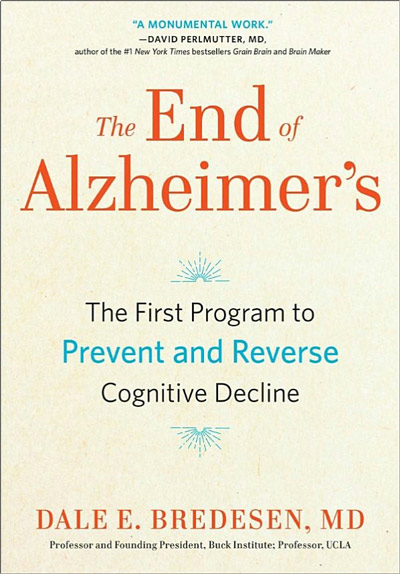 The number of patients successfully treated with ReCODE [the Bredesen Protocol] is now over 200, and more and more medical professionals are using it successfully for their own patients. Since 2016 I have trained some 450 physicians, neuropsychologists, nurses, health coaches, and nutritional therapists from 7 different countries and throughout the United States in this approach.

Even more encouraging, increasing numbers of neuroscientists and physicians are beginning to recognize that Alzheimer’s disease is not what we thought it was. Rather than being caused by the sticky amyloid [an abnormal protein that can be deposited in any tissue or organ] plaques (or neuron-strangling tangles), the disease we call Alzheimer’s is actually the result of a protective response in the brain.

This is worth repeating, Alzheimer’s disease does not arise from the brain failing to function as it evolved to. It is not like cancer, where a genetic mutation—inherited or acquired during the course of life—turns a cell and all of its progeny into out-of-control proliferators that take over an organ. It is not like rheumatoid arthritis and other autoimmune diseases, where the immune system turns on the body’s own cells and attacks them. In those and many other diseases, something is dangerously out of whack: a physiological system is not functioning as intended.

Alzheimer’s is different. As I explain in detail in chapter 4, one of the key discoveries to come out of my lab is that Alzheimer’s arises when the brain responds as it should to certain threats. Why would evolution give us a brain that works like this? Because in most cases this response to outside threats succeeds; the brain beats back the threat and goes on functioning just fine. The problem comes when those threats are chronic, multiple, unrelenting, and intense—so much so that these protective mechanisms cross the line into causing harm. Specifically, Alzheimer’s disease is what happens when the brain tries to protect itself from three metabolic and toxic threats:

In chapter 6, I will explain in detail how we discovered that these three types of threats—which have dozens of contributors—trigger this protective response in the brain—including what the three kinds of threats do and why the amyloid response that they incite is so toxic to the brain’s synapses. But for now let me simply say that once we recognize that Alzheimer’s disease is what happens when the brain struggles to defend itself against inflammation, to function despite a shortage of beneficial compounds, or to fight an influx of toxic substances, the optimal way to prevent and treat the disease becomes clear: identify which of the many potential contributors to these three classes of threats a particular patient’s brain is responding to defensively, remove the specific contributors, and help it fend off the remaining attackers.

That means that in order to reverse cognitive decline in subjective cognitive impairment, mild cognitive impairment, or Alzheimer’s disease (and potentially in other forms of dementia such as Lewy body disease), it is necessary to remove the factors—preferably all of them in each of the three categories—that are causing our brains to defend themselves by producing the protective amyloid response. After removing the three kinds of threats, the next step is to remove the amyloid itself. Once you’ve eliminated the triggers for amyloid production plus the amyloid that has already been produced, you need to rebuild the synapses that the disease has destroyed.

If all of this makes you think there is not a one-size-fits-all regimen for treating cognitive decline, you’re right. However, since we’re all vulnerable to each of the triggers and have no way of knowing which one (or two or all three) might assault our brain, it’s important to reduce your chances of all of them—of inflammation, or a shortage of supportive compounds, and of exposure to neurotoxic substances. If you already have cognitive decline, it’s crucial to determine which of the readily distinguishable subtypes—caused by inflammation, by a dearth of brain-supporting molecules, or by toxic compounds—you have, since each subtype has its own optimal treatments, and in fact each person’s profile dictates a personalized optimal treatment.

For this reason the effective prevention and reversal of cognitive decline in Alzheimer’s involves the new field of programmatics, which means that developing optimal treatments for complex chronic illnesses such as Alzheimer’s involves identifying the many contributors for each person and then fashioning the best program to target these contributors. The reason we have to enlist programmatics to fight Alzheimer’s is simple: the many contributors to cognitive decline render the single-pill approach—monotherapeutics—marginally helpful at best, and usually ineffective.

Let me emphasize that your brain health is largely affected by these three kinds of disturbances and your ability to thwart them in the first place or drive them off if they have already taken hold in your brain. Fortunately, there are relatively easy ways to identify, measure, and treat each of the three disturbances in order to optimize brain function.